One of the ATC Swaps I participated in recently was an Alice in Wonderland theme with a Halloween twist.  We were supposed to create 5 cards that depicted what we thought Alice would see if she encountered Halloween.

Below are my 5 cards: 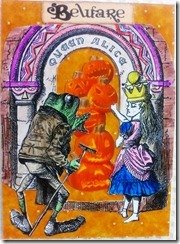 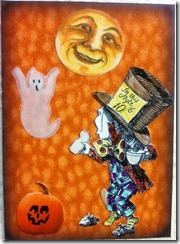 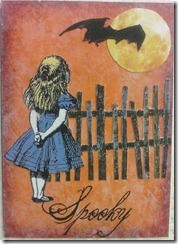 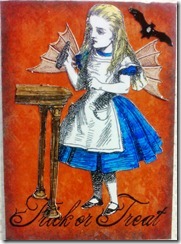 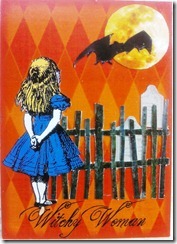 These (even the Spooky card  - different printer) were all done using mainly photo paper.  Yes, I did cut out all the white spots in the fences without tearing the fence.  Yes, I did cut out the arch in Beware card.  Yes, I did cut out the fiddly rake handle on that card too.  Every thing except the background paper was painfully cut out with scissors and an Xacto knife.  Yes, it was mind-numbing and a few choice words might have been said.  Luckily, no fingers were harmed in the creation of these cards.

As you can see, I did run out of ideas and recycled the Spooky card into the Witchy Woman card with just a few (two tombstones & the wording) changes.  At the time, I had a shortage of Alice pictures.  No more; I now have plenty, thanks to http://www.oldbookart.com.

These cards ended up looking pretty decent even though they are mainly photo paper.  There are a few things I probably would do different if I do a theme like this again.  One would be use less photo paper.

I did find out an important fact.  You can use Prismacolor markers on Satin Photo Paper and they are color-fast & dry almost instantly – no smearing.  That’s how all but the Spooky card were colored.

I did cave and used three stickers.  The tombstones in the Witchy Woman card and the ghost on the Mad Hatter card.  At the time, I didn’t have anything better.  If I do this again, I now have Halloween stamps to help me out.  I don’t rule out stickers on my cards (unless the swap prohibits them), but I really don’t care that much for them.  They have to be exceptional or I’m in desperate straights.

Posted by Tarnished Rose at 6:36 PM