I’ve had a problem in my studio for two weeks now.  My middle set of lights wouldn’t work.  I’d flip the switch, they’d flash a few times, then go dark, or they would do nothing at all.  Even on a  normal day the lighting in my studio is inadequate (I supplement with a mixture of OTT lights and desk lamps), so it’s been even worse.

Hubby to the rescue!  Yep, I’m married to an Industrial Electrician.  I just KNEW he could fix my little electrical problem.  So, this afternoon, after a trip to Lowe’s (we had to get parts to fix the windshield on Number One Son’s boat), he decided to tackle my lights.

Was it a bad wire?  NOPE  Bad light fixture?  NOPE  What it was was ANTS! 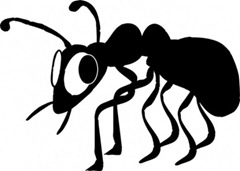 Yes!  Stupid ants got into the switch and were interfering with the flow of electricity.  Hubby messed around with the wires, got a few more to fry, and when the lights came on and stayed on, told me to leave them turned on for a few days.  Yes DAYS!  He said that way they would continue to fry until all of them were dead.

In the meantime, Number One Son is to RESPRAY the outside of my entire studio, concentrating around the doors, windows, and seams.  See, my studio is a converted metal storage building in my backyard and even though I sealed it as good as humanly possible, things get in (remember the lizards?).  Plus, it sits under an oak tree.  Good for shade on hot southern summer days, NOT GOOD for anything electrical!  Apparently, the ants are coming out of the oak tree and into my shop.  Electricity seems to draw them like a magnet.

While Hubby worked on the lights, I decided to add one of those multiple outlet things so I could plug more stuff in (I have tons of outlets, just not where I need them).  I had been wanting to plug my computer into the outlet by my worksurface, but due to lack of plug space, had run it’s cord across the floor to the other wall.  Klutzy me had already tripped over it once.  Well, when I moved that little three outlet surge protector thingy (yes, thingy LOL) to my workspace wall (where my computer is now plugged in, YES!) and took off the faceplate to install the big multiple outlet, there were fried ants EVERYWHERE!  UGH!  Ant Bar-B-Que.

Posted by Tarnished Rose at 8:05 PM