Experimenting Done – For the Time Being

I took this past Saturday & did my little experiment using patching plaster and craft metal.  Want to see what I came up with?

First, let me say this…….I had a blast.  It’s been so long since I just let myself go, tried something new, and not given a rat’s rear-end what it looked like when I finished.  That is extremely freeing!

First pic here is the original.  I took the craft metal from which I had punched several flowers and used that as a stencil.  After taping it down to a piece of Bristol board, I went to town with the plaster (note to self….use removable adhesive the next time). 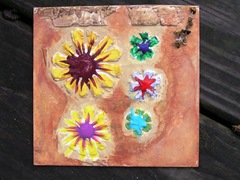 Okay……the plaster flowers are kind of bright & they look plopped down with a halo effect thingy going on.  The one element I liked was the plaster at the top.  I gave it several washes of paint in different colors, wiping each wash off after a few seconds of drying time.

Next, I asked for and received some input from the Gauche Alchemy Design Team.  Two suggestions were to tone down the flowers and blend the terra cotta color (almost-dried up bronze paint) more.  Thanks Jo!  So, I reworked it. 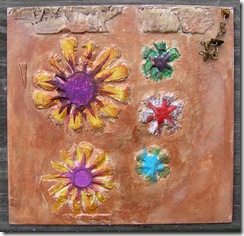 Notice how the colors are more blended, there aren’t jarring changes in the color, and the brightness of the flowers doesn’t blind you anymore?  I was told it brings to mind Mexican tiles (thank you Jennifer!).

Of course, me being an embellisher, I just couldn’t resist adding the little piece of broken necklace in the top right corner.  Next time, I’ll punch a hole and thread it through there & leave it hanging loose instead of gluing it down.

Okay, so, I’ll never be a great artist.  BUT, I had fun, got to finger paint (I LOVE finger-painting) and for once just let ‘er rip.  I think I’m ready for another go around.

Finger-painting and plaster anyone?

Posted by Tarnished Rose at 3:04 PM