Stopped in my Tracks

I’m having one of THOSE days.  You know, the kind where you want to do something, but as soon as you approach that “something” you entire body goes into shut-down mode?

Well, the other day, I thought I would tackle my little work-room in the house.  I was used for my doll-making but now it’s become a catch-all for swaps and “finds”.  Here’s a picture: 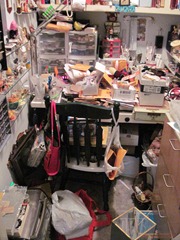 NOW can you see when I walk in  squeeze my body through the door it screams “GET ME OUT, GET ME OUT”?  Some of the stuff needs to go outside to my studio, a LOT of it needs to be filed away in binders (all those lovely ATCs), and the rest needs to be put away in the work room itself. 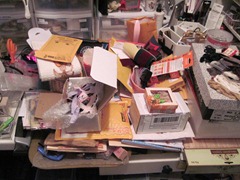 This is one of two rooms that have me stymied.  I cleaned up the dining room and my studio, but for some reason, this 5’ x 6’ space terrifies me (as does the 10’ x 10’ spare bedroom I need to clean).  It’s almost like I’m afraid the room will eat me alive.  Now, we all know rooms don’t eat people, but what if the Black Hole of Calcutta opens up?  HMMM?  (BTW the Black Hole of Calcutta is what I call the place things disappear to, never to be seen again).

I’m beginning to think I need to take a week off work to tackle these two rooms (along with a few other projects).  Pull EVERYTHING out and systematically sort and place it.  Now the week off is no problem; I have plenty of leave.  The timing is the key.  I’m approaching a time of year when work gets really busy trying to close out a fiscal year and start a new one.  Also, if I take a week off at the wrong time, I’ll be hit by “why don’t you go to such & such with us since you’re off”, us being hubby and son (who will want me to go with them and sit around twiddling my thumbs in a motel room while they fish).  The “um no, I took this week off to sort my room” wouldn’t fly.

So, until I get that week off or just “woman-up” on a Saturday or Sunday and tackle that room, it’ll remain one of the scariest places I’ve ever seen.

Posted by Tarnished Rose at 1:53 PM