This is the second of three installments showcasing projects I created with Gauche Alchemy’s Showstoppers Kit.

Today, I want to share the movie-themed tag I created.  When I saw the magazine clipping with the skull in the background, I HAD to do something with it.  Talk about a totally cool pic!

I think the gold punchinella sets the picture off perfectly.  And I just adore the green satin roses I found in the kit. The “feature film” is a transparency from an Altered Arts kit set on a piece of white ouchless cardboard.   The tag was spritzed with Tattered Angels mists to give it a touch of color.  Who wants a plain old manila tag?  Not me! 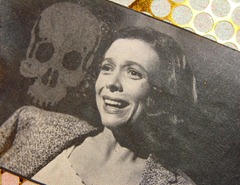 See, told you it was cool!  If I’m not mistaken, this is from an interview done to promote a film in the 1950’s.  I was more interested in the pic than I was in readying the article. 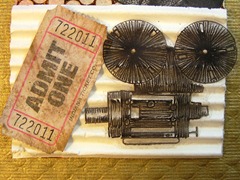 Here, I used Tim Holtz Distress Ink in Old Paper to grunge up the ticket that came from the kit.  I then placed it and a transparency from the same Altered Arts kit on top of a piece of white ouchless cardboard.

Please stay tuned for the third and final installment in my Showstoppers project series.  It’s the main attraction!

Posted by Tarnished Rose at 6:55 PM