Well, I came through the procedure on my neck okay but it will be 4-6 weeks before I know if it "took" this time and if it will give me some relief from my pain and allow me to turn my head.  Now, we start working on my back.  I literally could not get out of bed this morning when I woke up & in fact it took several attempts and about 20 minutes to get mobile enough for a shower.  Thank goodness I'm on sick leave this week!  At this moment, I'm sitting on the couch with an ice pack on my neck (the doctor said I looked like a pincushion, I told him I felt like one), still hurting even after a Lortab, and suffering from insomnia, a side-effect from the Lortab. 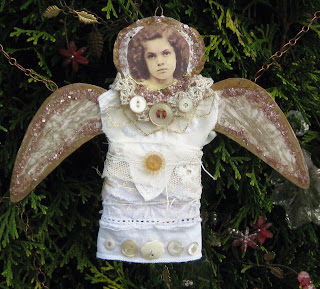 Now a little good news.....I WON, I WON.  I was the lucky winner of the giveaway at Flatwoods Folk Art.  Kerin from Remnants of Olde had created a wonderful tutorial for a Flying Angel Ornament and they pulled my name. 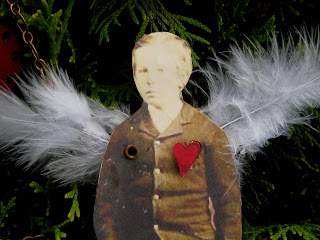 Aren't they so cool?  And just in time for Christmas. 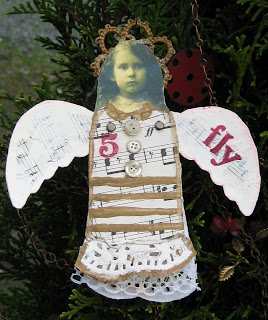 If your interested in making one for your own use, the tutorial is for sale at Remnants of Olde.


Since I just acquired some wonderful postcards from Ebay (egad that four-letter word again LOL) and from an auction this past weekend, I have plenty of faces for the angels.


The auction I went to this past weekend was surprisingly poorly attended, so I got some GREAT deals!  Most for our Etsy store, but some for myself.  I'm planning on getting some pictures loaded, probably after Thanksgiving since I'm headed to my parents' house and Mom doesn't have as good a setup for blogging as I do.


Have a Happy Thanksgiving!